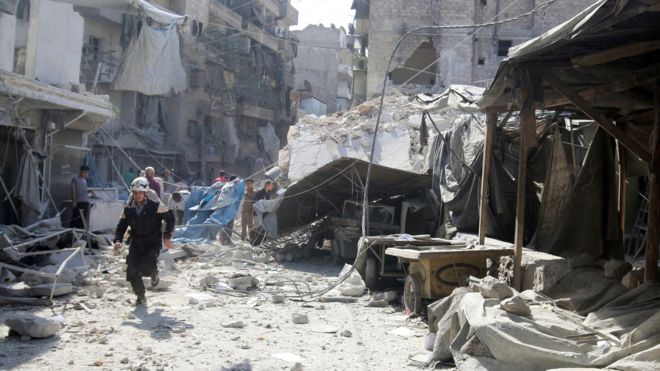 To get started, I would like to show my condolences and anger, by the facts occurred in the month of April in Syria, the Government of Bashar Al-Assad with the military and logistical support from Russia and say that they are attributed or be condemned as war crimes according to the art.8 of the Statute of the International Criminal Court (the Court will have jurisdiction over war crimes in particular when committed as part of a plan or policy as part of the Commission on a large scale of such crimes. classifying it as war crimes, to employ poison or poisoned weapons, as well as the use of Asphyxiating, poisonous or other gases, or any liquid, material or analog device.), this article adopts the rules of grave breaches of the Geneva Conventions.

Therefore, having tests physical and testimonial, more than sufficient to impute and condemn these facts , such as war crimes, because until today, it has not acted or has taken action, nor by the International Criminal Court, or by the UN Security Council.

As a lawyer and Vice-President of the international criminal Bar  and on behalf of the BPI, we condemn these "criminal acts", a call to justice,sanity, and efficiency of the ICC and the Security Council, to take action and begin an investigation procedure to both direct and indirect perpetrators of such "criminal acts".

We must also imagine the effect and international repercussions that will generate these events at all levels, therefore, what it is for is a very specific and particular research process, which must be duly on the concrete, to condemn legal framework to the "responsible."

In order to finish this article, with these words, "There is much prodigious in this world, the fable is full of lies; the truth no longer exists in our history".

Vice President of the BPI-ICB-CAPI